Alone – The Understory and Next Theme

Rob McRay delivered another most outstanding understory at the end of February 2016’s night “Alone”.

Tonight, in an apparent act of protest against Hallmark’s forced romanticizing of Valentine’s, we chose to spend this evening alone.

We went to a boring silent film with a hot chick, became possessed by the spirit of the 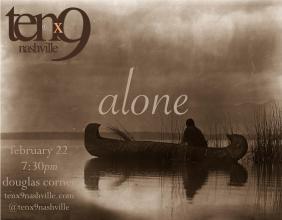 film, and started a revolution all on our own—but we made permanent friends with a giant and his family.

We spent a last night alone in the city of love, crying over the quiche splattered on our fancy lady shoes, and Charlie Brown walked toward the Eiffel Tower…through the golden arches.

We went alone to a Tay concert, feeling creepy but excited, and lost our minds with an enthusiastic crowd worshipping an idol floating on a pedestal.

We went on a lonely bike ride, looking for someone with skin, and remembered the kindness of a German stranger, and paid it forward to a lonely woman looking for shelter…and answered each other’s prayers.

We entered the field of battle with our mighty talon, emerging victorious…only to lead our team again into enemy territory—and found ourselves alone, mortally wounded by friendly fire.

We sat alone, rewriting Anakin’s love story, compelled by some inner Darth Vader to make his story yet deeper—and found the words to our own primal scream.

We rode an elevator alone, running away again and again, seeking attention as a poor substitute for something more—but we finally found enough light to see our own beauty.

We took our first family vacation to the Disneyland of the North, anticipating the screaming nausea, but finding ourselves alone in the midway, lost in the strange world , finally finding our family in the fog, only to feel we are still in the fog.

We waited in line to destroy space nuggets at the skating rink, wishing for a date with our 8th grade crush…and contemplated the relative value of video games and coloring books.

This was our evening alone.

Thanks to Michael B., Bayard, Kate, Luar, Michele, Emily, David, Sarah, and Whitney for some excellent storytelling.

Join us next time on March 21st for our theme “Yes or No.” Have a story? Submit your proposal here. And bring a friend! It’s always free.