Show and Tell – The Understory and Next Theme

Tonight, Nashville, we had “Show and Tell.” 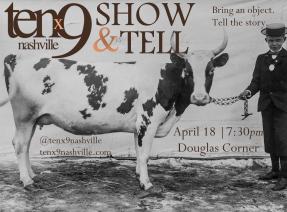 We learned what happens when a radioactive Southern girl goes through TSA with fresh fruit, mysterious powder, and explosive perfume…and almost gets engaged.

We learned about providing a home for abandoned cats and rescued kittens, even though they clutter your house with toys and make you sneeze.

We learned about pieces of the Titanic on late night TV, in worldwide museums, and in a genuine, authenticated, 100% pure plastic locket.

We learned about hiking in some foreign land at some unknown point in time, and about ironic dog collars, and marking territories—which may or may not be useful information.

We learned about bizarre students at a hippie school gambling illegally on a boxing exhibition between Boom Boom and the Quickness.

We learned about misogynist snake-handlers, and boas in our hair, and metaphorical life-threatening serpents…and venomous systems that keep breathing in our ears.

We learned that you can’t make a short-wave radio out of a toy jumbo jet—no matter what an idiot with a flaming crew cut tells you.

We learned about stressful election nights, and frantic newsrooms, and the pride of earning a pith helmet from a masterful editor, whose bear hugs we will miss.

That was our “Show and Tell.”

Our next night of true stories at Tenx9 will be May 23. Our theme is “LOL.” Got a funny story about your life? Let us know here.