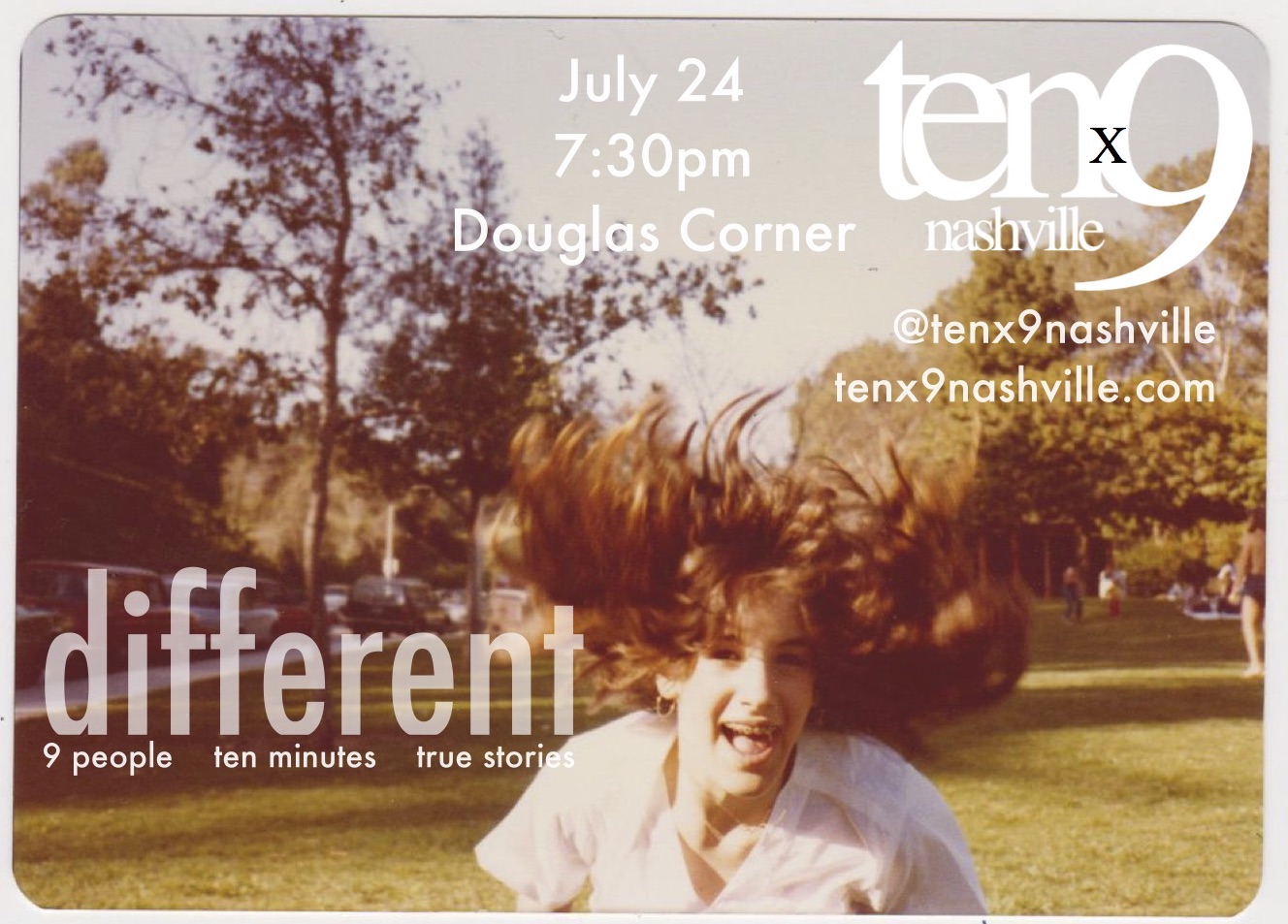 Here’s first-timer Heather Lawrence’s poignant story about how questions made her different. She told this for our July 2017 theme “Different.”

I was 27 years old, standing with a band I’d put together in front of a crowd of 120 people, leading them in one of my lifelong favorite hymns when I realized I couldn’t pretend anymore.

These may be my people, but I was pretty sure that once they knew everything going on 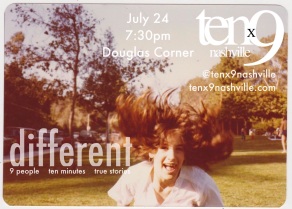 inside my head, I wouldn’t be theirs anymore.

This was a Sunday morning in early May, and I was just trying to last until June in this job, but that morning I knew I wasn’t going to make it. I knew I didn’t belong.

As I led the congregation in worship with the hymn I used to call my heart song, I broke it down line-by-line inside my head, thinking, “this line is still okay,” “I definitely don’t believe that anymore,” and “I’m still not sure where this idea even came from;” and I knew my faith was on the verge of a jenga-style collapse. I told my team I only had one more week in me.

I’d already resigned from my job two months ago at this point, but my co-worker/pastor/boss (professional church relationships are very confusing) had asked me to stay until June. So like a cracked and broken vase, I held the pieces in place until I got far enough away that I could be sure my deconstruction wouldn’t hurt anyone else.

See that’s the thing about being a pastor: you sort of get paid to be right—or at least to be confident in your beliefs. I’d spent the last three years leading up to this point keeping my ever-expanding cracks in my belief systems off-limits from anyone else. I mean, sure, I could talk to other leaders about it, but I had to be careful about how candid I was with anyone who had the power to remove me from my position, because job security.

I sure as hell couldn’t talk to people I was pastoring about it, because I had about 5 verses memorized that told me exactly what happens to someone who causes problems someone else’s walk with God.

I also couldn’t really talk to any peers or friends about it, because most of my peers were either uninvolved with theological dialogue or so closed-minded that my “progressive” ideas were never even entertained. So I was left to debate both sides inside my head—which, if you’ve never been in an ongoing intellectual debate with yourself, let me tell you that it will drive you crazy. My daily bible-reading (yes, there really are people who read scripture every day) turned into an academic text analysis of multiple topics at once. I honestly made myself sick getting so stuck in my head.

And the hardest part of all of this is that I was really hoping for my understanding of Scripture and my evangelical worldview to still stand after answering my questions; which meant I had to be careful not to toy around with these ideas too much because they may well lead me down that slippery slope I’d been cautioned against all throughout seminary.

No joke: day one of class at this Southern Baptist school: the president was teaching my first class, and he walked up to the podium and after his introduction, I can still picture his weird speaking mannerisms he had as he said, “you’re going to be tempted to question your views of morality because of the world around you, but I am warning you that it’s a slippery slope from asking whether the bible really prescribes gender roles, to then asking whether the bible really condemns same-sex marriage, and before you know it, you’ll be sliding all the way to being an agnostic or atheist,” (which, to the community I was a part of, really didn’t need to be distinguished because both needed to be “saved” anyway.)

I remember sitting in my seat horrified that I might lose my faith, my community, my future plans, my whole identity and everything I knew to be true…all because I started asking questions. So I didn’t. At least until I couldn’t pretend anymore.

So back to that Sunday when I was finally honest with myself. This church I was about to leave, my coworker and I had built it from the ground up. It had been kind of my last hope for the institution of the church. When we started it, I ran headfirst into this mission because I believed in it, and I just knew it was going to be the answer to all my frustrations with the megachurch I’d been working in previously.

The drift away from all of that didn’t happen overnight, but one of the biggest problems for us was that I was a woman. See, my coworker was invited into church-planting cohorts and supportive communities of other men doing the same thing—all of which I was explicitly not invited into on account of my gender. Turns out the conversations that happen in spaces like that will really shape the direction of an organization…and if one of the two leaders of the organization isn’t involved in that, she might slowly lose her opportunity to influence the direction moving forward…

It hurt. Like hell. But I’m really grateful for it, because it sped up my deconstruction. It took heartbreak and feeling that I could no longer be proud of this church we’d started for me to let myself fall apart.

So in my disappointment with this church, I let myself re-engage with the questions.

One of the phrases I found myself repeating in countless debates during my three years of full-time ministry was that I’d rather be compassionate than be right.

It rang through my head as I found myself pushed to the edges in conversations. I had no way of predicting how subversive this idea would be to a community claiming to follow the most compassionate person who ever lived. But as my ideas got more and more challenging, as I moved more and more into gray areas, I clung to it as though it had come from the mouth of Jesus himself.

This phrase would escape my mouth as I was walking away from yet another debate with a biblical literalist about marriage equality or baptism or who is and isn’t allowed to become a church member, or even about what is or isn’t a sin.

Sometimes it was loaded with anger and accusation—you just want to have everything figured out, but life isn’t always so black and white, so how about you shake up your safe little boxes of morality and make room to love the people around you.

Sometimes it was dismissive and defeated—I know we’ll never agree, and honestly, you may never hear me because I’m not convinced by your interpretation of scripture.

I couldn’t be a rule enforcer anymore. I couldn’t continue to drive forward an institution that was more concerned with obeying a text from two millennia ago than about loving the people right in front of them. And I couldn’t worship a God that expected that of me.