Lost – The Understory and Next Theme

Nashville, tonight we were lost.

We were lost in a deserted part of the ancient city, and more lost in the early days of 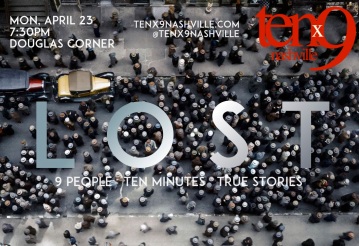 married life. But in the end, we were just glad to finally both know where we are.

We lost our “5-year-old” mother when our discriminating 17-year-old palette led to sprinting around the perimeter of the grand opening, till the cringe-worthy announcement reunited us in a moment of self-discovery.

We grew up traveling in military engagements in which the prime objective was to make good time. But we discovered that families in bizarro world were happy just to kind of know where they were going and not get lost.

We took a beauty break for the soul and got lost in the maze of the sandstone city, teaching Pi in Marakesh, and camel-riding in the Sahara. But we found our own life—which we brought home, and found home was also new.

We were lost in interviews where we wasted time competing with fire alarms and looking for people in the witness protection program and seeking connections in pubs and Pokemon. But we finally found relationships we cherish, and we know we can find our way out of the woods.

We left behind the red-eyed heathen of depression and bitterness and went to look for a place that calms a beating chest. And hiking through the tundra, avoiding apex predators, and fishing in the majestic beauty of wilderness streams, we found hope.

We felt lost when unrealistic dreams of perfect child-birth in a puffy pink gown crashed into Fantasy Mom’s prophecy of rejection and drying up. But our beautiful baby rescued us from the nightmare of a hot-rock massage.

We were lost in unmet family expectations and Grandpa’s dominating opinions. We were happy to learn that he thought his baby doll was talented—but we found we aren’t defined by that. And we sent him off with his version of “The Curtain Falls” and cherish his last musical “Grandpa.”

We were lost on a date when brownies with secret ingredients led us to not know if we were on a train, or what our date was saying, or whether we had eaten, or how to talk, or how to feel our face! But he helped us find our way home…and all we can say is, “Happy Friday!”

Huge thanks to Chloe, Anna, Matt, Cindy, Steve, Erin, Sharon, Jack, and Amy for their stories! We look forward to seeing everyone at Douglas Corner May 21 for our theme “Snapshot”. Bring a photo, tell the story. Let us know if you have a story!