Here’s Jeff Shearer’s funny story about the day he worked in a sausage factory. He told this story for September 2017’s theme “Nashville”.

I received a call from the temp agency the first week I arrived in Nashville. Until I found a teaching job, I told them I’d take anything they could offer me. I scribbled on a notepad: 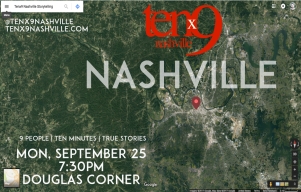 Instead, when I walked through the doors of Odom’s Tennessee Pride, I was met with the sounds of grinders, tumblers, stuffers, linkers, emulsifiers, and macerators. All the sounds heard in the process of making sausage.  I had never before or since heard of a macerator. It’s unique to 2 industries:   sausage making, and sewage management.

My first indication that this was not a job sweeping floors was when the supervisor handed each of us first timers a steel gauntlet and said, “Try this on for size.” I was still trying to figure out why we would need only one metal mesh glove, when he then asked: “Any of you have a problem with the sight of blood?”

I was spared the delivery room.  I was sent to the cutting room. There I was given a five minute lesson on how to use an electric knife that looked like an ice cream scoop. A constant line of huge femur and scapula bones rolled toward me. The meat on these bones was gone. My job was to remove anything remaining from the bone.  Anything.  When my 10 gallon tub filled up, I was to then empty my carvings onto a high speed conveyor belt that sent all the product through a set of flapping plastic doors. Whatever happened on the other side of those doors I will never know, but the sound was a cross between a bowling alley and a room full of bouncing rubber watermelons.

I lasted one hour and 5 minutes in the cutting room. After failing a remedial lesson, it was decided that I was not cut out to be a deboner. A virtuoso deboner can roll 10 pounds of fat per minute onto the conveyor belt. I was averaging — just under two.

Over the next two hours I also failed to make the cut as both a seasoning blender and a cold salvage operator. Three strikes before lunch usually means you don’t get to stay for lunch. But Tennessee Pride was determined to provide me one more opportunity to prove that I had what it took to succeed in the world of sausage. I felt like I was back in junior high on the football sideline. “We’re going to send you in, son. Now don’t blow it. We believe in you.”

And that’s how I made it to the packaging room. The final step in production. Here, I was given the task of climbing several feet above a slow moving conveyor belt with twenty pound casings of frozen sausage.  I then loaded each roll of sausage into one of 4 metal cylinders that sliced each roll.  This process produced perfectly round quarter inch thick sausage patties. I was shown how to adjust the speed. Below me, two lines of women faced the conveyor belt, 6 on each side.  And each woman had the task of shuffling 12 patties into little white boxes marked “Ready to Cook. Real Country Breakfast Sausage.” As fast as they completed a pallet, it would be whisked off to a refrigerated truck bound for distribution. The whole operation was seamless.  This was the epitome of a well-defined process.  The timing was crucial.  And I discovered I had a key role in that timing.

But I also discovered very quickly my innocence in production line protocol. Because in a job that to the uninitiated looks like it’s ruled by uniformity and monotony, once you are inserted into that process, you quickly see that there is unspoken dynamic at play.   I had always thought life on an assembly line must be mindless – that you could simply endure the 8 hours by listening to an internal playlist of your favorite oldie goldies. Oh, it’s five oclock already? I was just about to listen to Johnny B Goode.   I had always assumed a slow day was a good day.

The 12 women on my line relieved me of that notion. And they did that without ever saying a single word. They couldn’t. It was too loud. We all wore ear plugs. They could have all yelled at once and I never would have heard them.

No. It was the body language.

While I was happily peeling the plastic off the tubes of frozen sausage and guiding them into the metal slicers while mouthing the words to a favorite song,  I looked down to see 11 heads all turned toward one woman. She was small, much older than the rest, and had the face of a tired owl. There was a unanimous expression of “do something” in their eyes. The owl-faced woman then looked me straight in the eye. She tilted her head to the end of the line where the last two women only had 2 patties between them. Sure enough. One of my feeder tubes was empty. I quickly fed a new sausage roll into the slicer. When I glanced back at the line, all was fine. I tried to give the women a look that said “Small oversight. That won’t happen again.” But nobody looked my way.

Twenty minutes later, I noticed the youngest of the packers glancing up at me. Just for a second. Then it happened again. And again. Flirting, on a sausage line? I was trying to figure out a way to make a face that read, “Sorry, girl, I’m spoken for,” when she turned to Owl Woman and raised the same eyebrow she had raised at me. The Owl gave me a look with both eyebrows raised, shot a glance at the conveyor belt, and cocked her head as if to say, “Really?” I then saw that the patties were stacking up, and each woman was having to reach downstream for patties that were slipping by them. I found the speed adjuster and spun in down. But I went too far, and in no time the Owl was swooping her eyebrows up, up.   I split the difference on the regulator, and the 12 woman soon fell back into their regular rhythm.

For the next 5 hours, I was a nervous wreck.  I studied each move the women made, looking for any hint of annoyance or stress.  No more oldie goldies. It was like driving a car on a windy mountain road with cliffs on both sides. It took me forever to figure out that the gestures on the woman closest to my station.  Too fast.  No, too slow.   No, too fast.   I spent nearly an hour desperately trying to find a calibration that synchronized with her gestures, until I found out her gestures were the result of some sort of facial twitch.

Five minutes before the shift ended, a man with a clipboard and a red hardhat came by. He put the clipboard in front of the older woman. She took a quick look at the clipboard and then back down at parade of patties. The hard hat man raised a thumb in front of her as if to ask: “Is everything OK?” Oh-oh, I thought. All the women looked at me, and then watched  the older woman as they finished their remaining boxes. The older woman took her time in responding –as if her work was more important than the question in front of her. The man still had his thumb up. The older woman never lifted her head, but I believe there was an almost imperceptible glance in my direction. It might have been a blink, but my gut felt it was a glance. Then she nodded at the man, and he put a checkmark on his clipboard and left.  Our shift was over.  The next shift of workers slipped into place, and we all headed home.

That night I dreamed about sausages. I found myself with 11 other patties in a small white box. It was cold. And as the lid was being shut I was yelling “There’s been a mistake. I don’t belong here!  You don’t understand. It’s all a big mistake.   I’m an English major!” But my voice was drowned out by the noise of a hundred machines and belts and moving parts.

In the morning the phone rang. It was the temp agency. Back to Tennessee Pride, I asked?

“No. We’ve filled our quota there. Here’s your new assignment. Write this down.”

I grabbed a pen.

In the back of my mind I could still hear yesterday’s endless noise of the sausage slicer.